There are some decisions that will take me forever to make. Sometimes I agonize over every angle, write out a list of every possible pro and con, and text ten different people to ask their opinions. I’ll stand in line at Jeff’s for ten minutes, reading every option on the menu and discussing all of them out loud before making a decision, changing my mind, and then changing it back. Possibly. If the cashier doesn’t convince me to get something else. My decision to take a semester off of school and volunteer for the Israeli army was nothing like that. Of course, I had spent all summer thinking about Israel “ who didn’t? I certainly wasn’t the only one of my friends checking JPost a hundred times a day, sharing every FIDF graphic, denouncing CNN, starting arguments online, and going to every rally, protest, and vigil. But that was what started to drive me crazy: no matter how much we all cared, we weren’t actually doing anything. At first, I appreciated that my news feed had been taken over by actual news. Everyone and their mother wanted the internet to know how much they cared about Israel. But soon a feeling of hypocrisy kicked in: we were all posting about falling rockets and red alerts from our comfy couches in Los Angeles. It was the definition of slacktivism, and many of us recognized it and were frustrated by it. But those who acted like they were experts on the situation “ what action the IDF should take, what our opinions should be “ frustrated me more. At a certain point, every Facebook status made me think, If you care so much, why aren’t you THERE? I wanted to call them up and demand, “How can you justify not doing more to help?” A few days later, I realized that if someone were to ask me the same question, I wouldn’t be able to justify it myself. But I still had the slacktivism mentality. And before I actually got myself motivated to figure out something I could do, suddenly, the war was reportedly over. As happy as I was to hear that, I couldn’t stop feeling guilty. If I talk about Operation Protective Edge several years from now and someone were to ask me what I did to help, my answer would be…absolutely nothing. About a week later, I woke up late and dug out my suitcase with the intention of packing up my room; it was the last day I could start moving back to USC, but I still couldn’t do anything without checking the news first. Still sitting on the floor next to my suitcase, I opened my laptop and started reading: the longer-than-usual-but-not-actually-very-long ceasefire had been broken (surprise!) and the war was starting up again. I’m not making this mistake again. Shortly after I had come to this conclusion, my mom called me, wanting to know if I still wanted to volunteer in Israel, because if so, she had heard about Sar-El, a program where people from all over the world fly in to help with civilian tasks on Israeli army bases. The Sar-El website had a post-operation “urgent call for volunteers” posted on their front page, which my mom used to convince me that if I was serious about volunteering in Israel, now was the time, and my excitement to go back to USC could wait a semester. It didn’t take much convincing “ I knew she was right. Smash-cut to twenty-four hours later and I’m sitting in a cafe with the California Sar-El representative, signing the last form. USC started five days later, but now I wasn’t going back. I didn’t know exactly what I would be doing on these army bases, what city I would be living in, or anyone going with me, and I wouldn’t find out until I got there. Crazy, right? Most people who heard this story thought so. But now that I’m in Israel, wearing an IDF uniform, nothing seems crazy anymore. It might still take me twenty minutes to decide how to order my schwarma, but I’ve realized that the best decisions are the ones that come to you instantaneously. It may have been last-minute and it may still seem crazy…but it couldn’t possibly have turned out any better. [from the Jewish Journal, December 18, 2014] 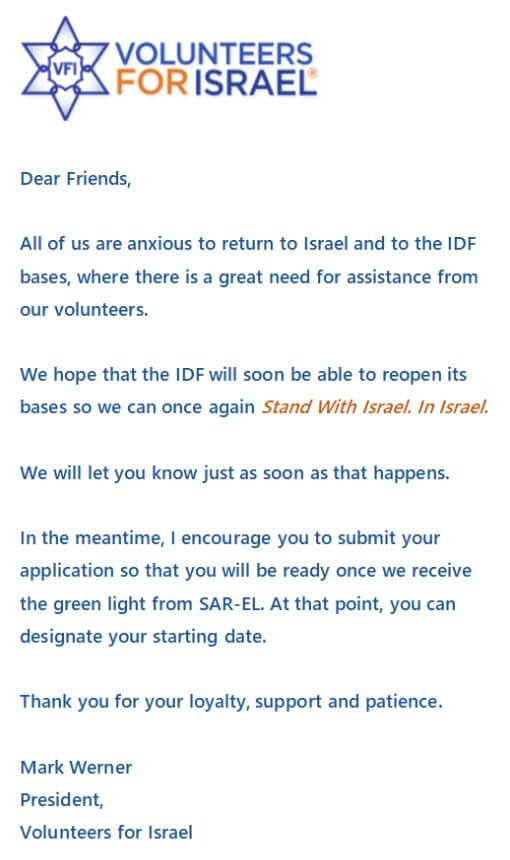