While the Israeli people celebrated the groundbreaking launch of the space explorer, Bereishit, on route to the moon, Volunteers for Israel was also enjoying an historic first.

On a recent Tuesday evening after dinner, a few soldiers and officers began trickling into the moadon, or volunteer lounge. Soon, the room used by the volunteers for recreation was full and the first trial run of VFI’s conversational English chats was about to begin!

Joan Allyn Kodish, Co-chairperson of the project, began with the introduction to Volunteers for Israel and Sar-El, its mission and history, as well as the hopes and aims for the model program. The statement that there would be no grammar exercises or lecture format was met with smiling, applause and war whoops. Without further ado and with the able assistance from my longtime friend, Gordon, and madrichote, we broke off into groups of three and THE MAGIC BEGAN INSTANTLY. The conversation flowed, mostly in English, but with occasional Hebrew explanation and much pantomime.

Each group began much the same way – – with the volunteer’s query: “What do you hope to accomplish by chatting with English-speaking Sar-Elies?” One officer, an air traffic controller, indicated that he wanted to be able to travel and attend U S conferences and joint exercises more confidently and, most of all, that he just wanted to get to know people who would travel so far to help the State of Israel. Others wanted to improve their English for post-service travels and higher education. We then spent a much too short and laughter-filled hour asking and answering questions. The topics ranged from why one chooses Sar-El as a volunteer vehicle to re-signing or extending service after the initial enlistment period; from home towns and families to favorite places in Israel and top USA destinations along with favorite leisure time activities.

Proof of initial success can be found in the fact that the attendees begged for additional sessions and permission to bring roommates, work colleagues etc. The chats continued, by popular demand, at picnic tables under the stars. Several soldiers, who were only at the Air Force Base for a week of training, begged for the English chats to travel to other bases. It was a joy to facilitate this series of events. We began as a roomful of strangers and ended, little more than an hour later each night, with hugs, much gratitude both ways and excitement for the next sessions. The volunteers and soldiers even joined together for an impromptu 20TH birthday celebration for Alona, a soldier from Russia who worked with several of the volunteers. The enlisted personnel, officers, facilitators and madrichote (aka last resort translators) were unanimous! Hooray for the conversational English program, the most fun and laughter to be found on a military base!

Each base and volunteer grouping has its own personality so the program changed as we began the beta test on a second base. On an open base (soldiers go home at the end of the work day) not too far from Beersheva, the experiment continued under the able leadership of Chairperson Beverly Cohen and Joan. This time, scheduling was a real problem because soldiers had to be released from work mid-morning to participate. Even so, the soldiers and interested volunteers laughed and gestured through idioms and slang, the universal language of sports, hobbies and hopes for the future. The easy exchanges, mutual interests, laughter and on-going discussions continued whenever paths crossed. Each and every Sar-Elie, who joined the chats, stated that they would do it again in a nanosecond. They loved getting to know soldiers as individuals, rather than merely as the anonymous wearers of green uniforms. The chats provided a fun and personally meaningful way to solve a long-standing complaint. Lack of volunteer/soldier interaction can now be replaced by friendship crossing the generations, group activities, enthusiastic, welcoming voices and judgement-free conversation. If you intend to visit Israel Sar-El style and would like to be part of the conversation, please contact Bev or Joan for more information and helpful hints. Also inform your Regional Director and Sar-El Volunteer Coordinator, Miri Sharon, to facilitate base assignments where the English language chats have been most requested. 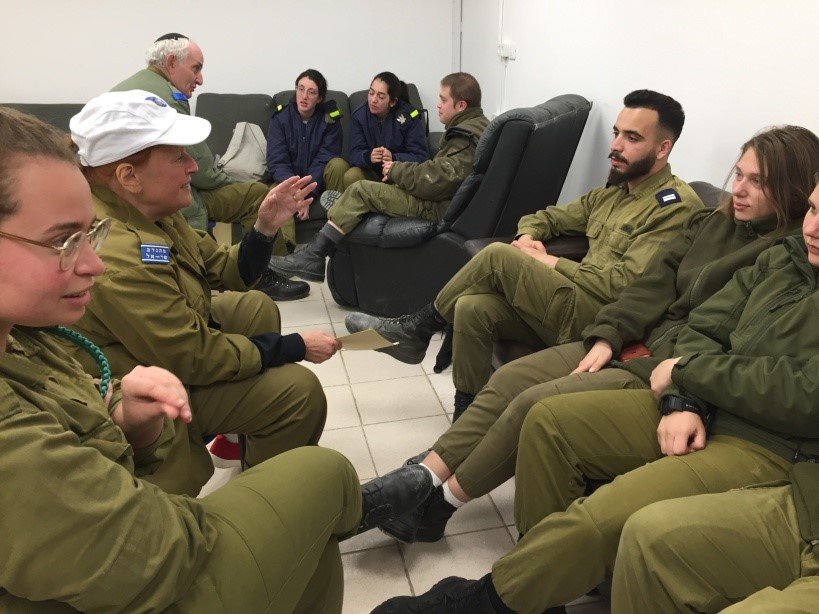 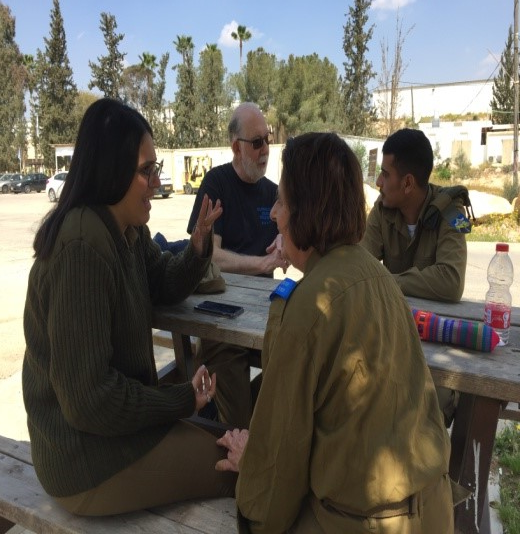